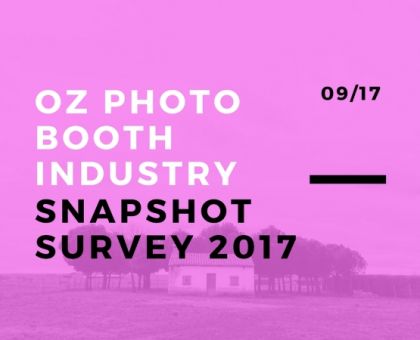 Photo booth operators, manufacturers and suppliers often like to talk about the state of the Australian photo booth industry. For the most part I think many of us have a good feel for how things are based on what we see, hear and feel but this leaves us all wondering if we are right or just think we are! Hard data of course can not be disputed it and so far as I am aware no studies have been published in recent times to tell us any different. So after seeing a similar survey done for the UK market one manufacturer suggested to me I should do the same, so I did!

During September 2017 a 10 question survey was offered to members of the Australian photo booth industry Facebook groups (Australian Photo Booth Friends, Photo Booth Owners Australia/NZ, BoothCon and Photobooth Finder). There were just shy of 100 responses which is a great snapshot of the current state of our industry and some of the results are very surprising!

The fascinating results of the Australian PB Industry Survey Part 1

From the first 5 questions the picture that the results are painting is that the average boother has been operating 2 -4 years and has 2 -3 booths, they offer mostly photo booth only services and charge $500 - $699 for general hires and $500 - $999 for corporate activations. More boothers have more than 3 booths than have only 1, nearly 1 in 5 have been operating for more than 5yrs and less than 9% average less than $500 a hire. That all points to the fact that on whole things are actually pretty healthy.

In part 2 of the results the survey delves into more intriguing questions like "How much longer do you think you will stay in the industry?" and "Is your photo booth biz profitable?" Ill publish that blog soon, stay tuned!

Disclaimer: The results published were attained via an anonymous survey conducted in Sep 2017 by Justin Jowett via the Australian Photo Booth Facebook groups. While every caution has been taken to provide readers with most accurate information and honest analysis, please use your discretion before taking any decisions based on the information in this blog. Author will not compensate you in any way whatsoever if you ever happen to suffer a loss/inconvenience/damage because of/while making use of information in this blog.