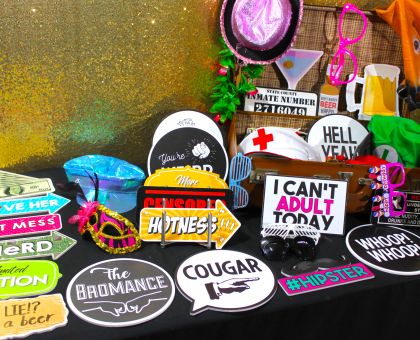 What Props Give Photo Booth Operators The Best Bang For Their Buck!?

I’m sure you'll all agree when I say that it would be great if all our photo booth props were built like a Willy Wonka never ending gobstopper that lasted forever. But sadly this isn't the case, and many of us booth owners are constantly replenishing a number of our props on a far too regular basis.

Hi I’m Dan from Wooshka Photobooths and after around 350 photo booth hires throughout Melbourne & Victoria in the past 2 years……I’m here to talk about what type of prop I’ve found to be the best value for my business. The kind of prop that keeps clients happy, stops me running off to the shops every week to replace, turns my props table into a people magnet and has simply saved me a stack of money over time.

I certainly learnt the hard way that if you get it wrong, you’ll be splashing cash left, right and centre, constantly reinvesting in the same props. Sure, it’s fine to restock a broken prop every now and then, but when do you draw the line and say “that’s enough of continually wasting my money on this one!” and look for a better alternative?

For me it used to be about three or four times, so if i realised that a prop had the looks of Brad Pitt, but the body of Mr Burns, I would cease reinvesting in it immediately, no matter how much I liked it or wanted it on my props table. I’m currently running 8 booths, which means I have 8 prop cases, and naturally the more cases you need to fill, the more important getting it right will be for you.

So what did I do:

Around a year ago whilst researching and attempting to improve my prop range, I stumbled across an American site called Yo Props, I’m sure by now many of you booth owners would have heard of them or even purchased some of their products (good move), but for the people that haven't, they specialise in terrific PVC double sided hand held prop signs.

Given that I lived in Australia and the state of the Aussie dollar at the time, I wasn't sure if buying a bunch of props from the USA was going to be overly great value, but I was determined to gather up a bigger, better and more impressive props range than my local competitors, so I went ahead and purchased around $400 of their signs and spread them evenly over three cases.

The results were fantastic!!!

People couldn't get enough of them, the props station compliments were coming in strong, feedback from clients was super positive and I felt like a proud parent vindicated in taking the plunge and spending the extra cash on a cool new product. Obviously having happy customers was nice, but what was even nicer was after a handful of jobs with the new signs, absolutely ZERO of them had broken. I was pumped! I’d found a type of prop that people loved, had a huge range to choose from, took up a good piece of space and most importantly looked like they could stand up to the rigours of a rugged boothin’ lifestyle (winning!).

At this stage I turned into a bit of a Propaholic:

I was a big believer in the PVC signs after seeing them in action week in, week out. So big, I actually considered developing a collection of my own, but quickly scrapped that idea (basically due to realising the time & effort required) and a few months later I found there was a fresh new Australian prop supplier on the scene called Photobooth Design Co.

The coolest thing about this for me, besides them having some really nice products I just had to get my hands on was these guys were based in Australia (and even better, Melbourne), so the postage costs & time of arrival wasn't going to be a factor for me anymore.

They were noticeably just starting out, initially offering a smallish range (although they do stock a much larger range now) and not surprisingly I was quick to purchase a bunch of their eye catching new signs.

My signs arrived in the mail with a free bonus prop and a hand written thank you note (which I thought was a nice touch) and just like my earlier purchased YoProps signs, people equally loved the new Photobooth Design Co ones. From that day forward, the two above companies really became my go-to websites for PVC signs.

In the early days I felt they were a bit of a secret weapon of mine, but it’s clear with their growing popularity that many savvy booth owners are jumping on board and in turn stepping up their prop game.

Both company’s have reasonably similar styles in what they offer, but I've found myself buying more of my bright, funky designs from Yo Props and most of my classic, monochrome and classier styles from Photobooth Design Co (either way I’m happy & there’s plenty to choose from). So for most, if you decide to grab some, it’ll simply come down to picking which particular styles would work best for you.

Pricing isn't really a concern anymore as the signs had proven they'd be worth every cent in the long run, so for me I just aim on getting a good mix of my favourite styles into all of my prop cases. (FYI - Photobooth Design Co is definitely a tad cheaper & their average standard sign seems slightly bigger)

So there it is people………PVC prop signs. By far my very best value for money type of prop + recommendation to save you a potential bunch of cash over the course of time.

Hopefully some of this info can be helpful for you readers out there that are potentially starting out in the photo booth game, or any experienced booth owners looking for a different way to take your prop options to an entire new level.

Disclaimer: This is a guest blog and the opinions and information and views presented here are not necessarily that of the site owner. Neither the site owner nor the the Author have been paid for writing or publishing this article. While every caution has been taken to provide readers with most accurate information and honest analysis this article is written by a third party, please use your discretion before taking any decisions based on the information in this blog. Neither the site owner or Author will not compensate you in any way whatsoever if you ever happen to suffer a loss/inconvenience/damage because of/while making use of information in this blog. 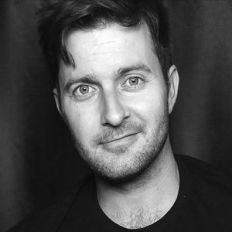 Daniel Bridge is the owner of Wooshka Photobooths. A Melbourne based photo booth company which has been operating since 2015 and also services the Geelong and Ballarat areas.